Skip to content
This site has limited support for your browser. We recommend switching to Edge, Chrome, Safari, or Firefox.

Happy New Year, we're moving past the darkness towards the light as we navigate 2022. Slow down and mind your words beginning January 14, as speedy Mercury turns retrograde in independent Aquarius. The messenger planet moves direct on February 3 in ambitious Capricorn, ready to get the ball rolling.

If you've felt as though it's hard to get your ideas off the ground, save your energy for January 18, when Uranus, the planet of change, stations direct in steady Taurus. Uranus has been moving in reverse since August 19, 2021. The planet of innovation has been quietly helping you to gather your thoughts during his retrograde. When he moves forward, you can give them the proper attention they need to create progress.

Conserve your energy until Venus moves direct in Capricorn on January 29. The planet of love, beauty, and money has been moving in reverse since December 19, 2021, encouraging us to reflect on who we love and what we have.

Dream big on February 17, when Jupiter, the planet of luck forms a sextile with enigmatic Uranus. What would you do if anything was possible? Get creative, take risks, and plan an adventure as these planets complement each other. Read on to find out what's in store for your sign. 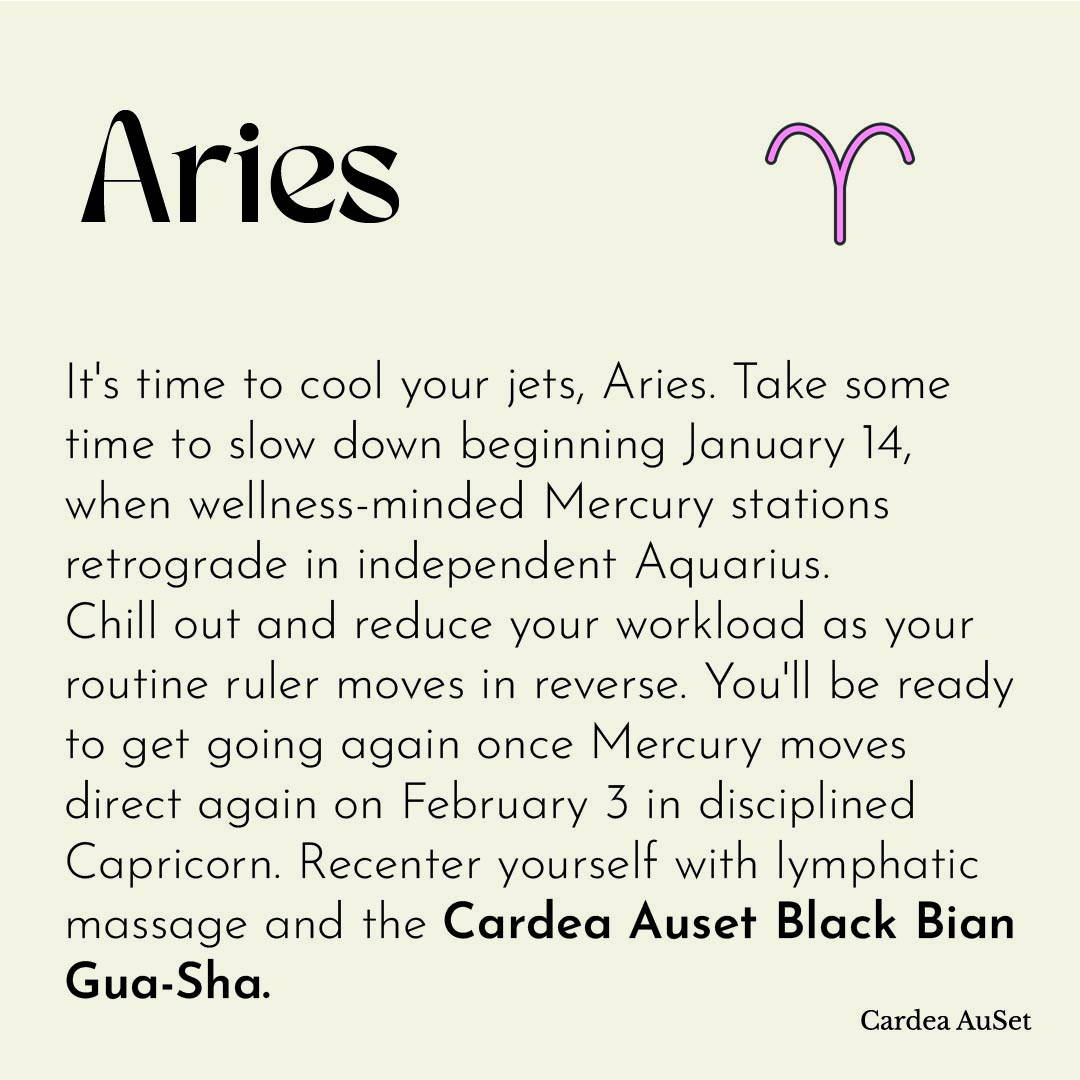 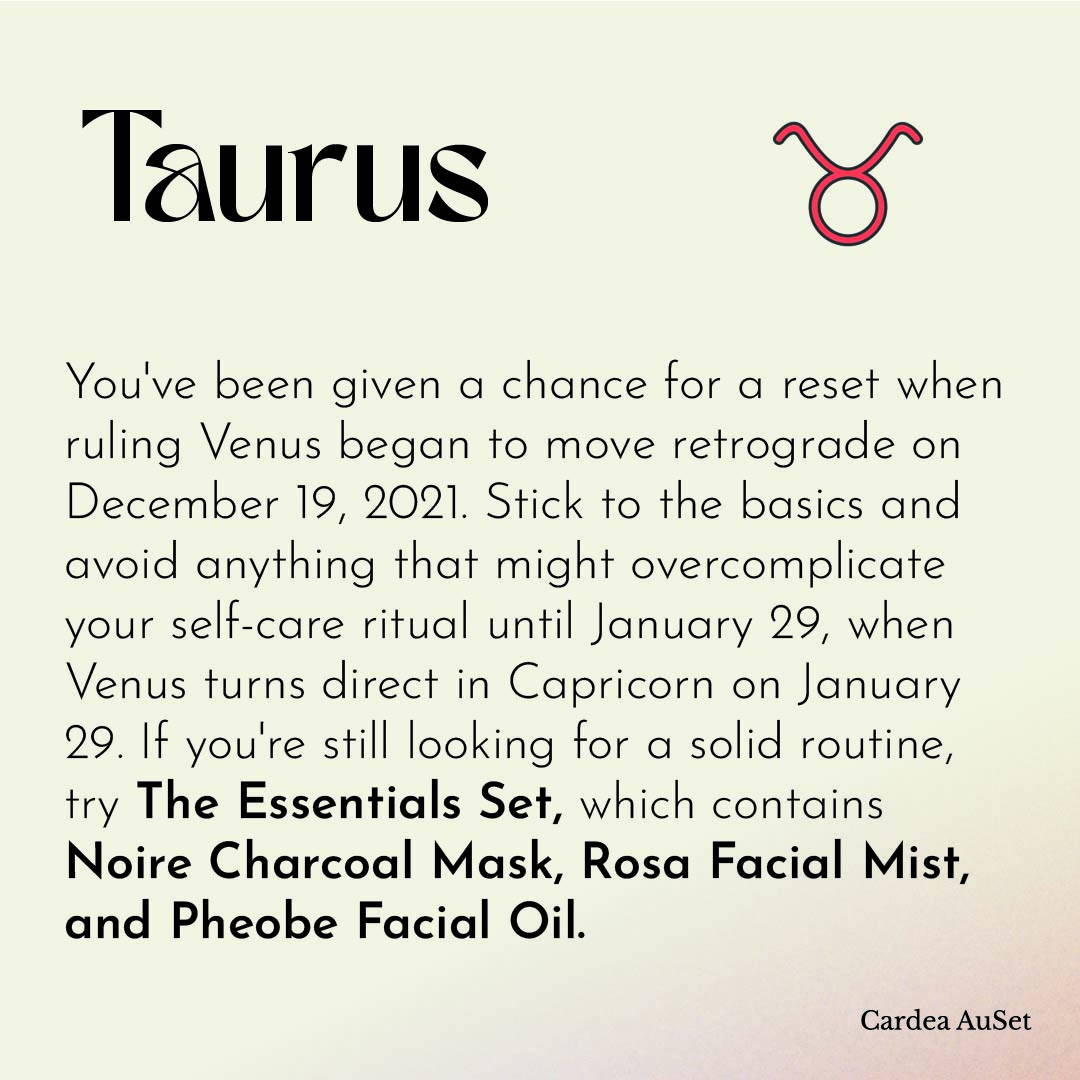 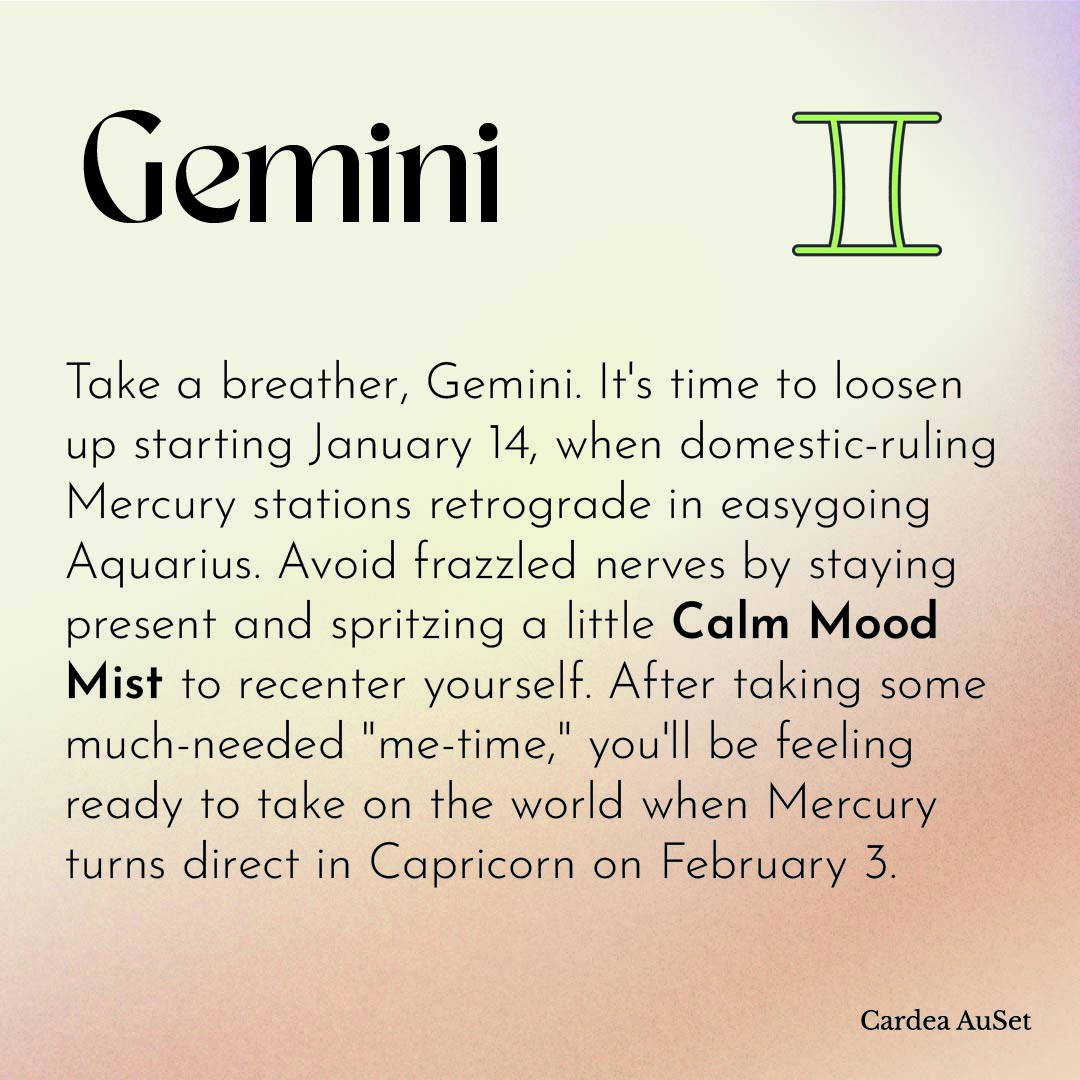 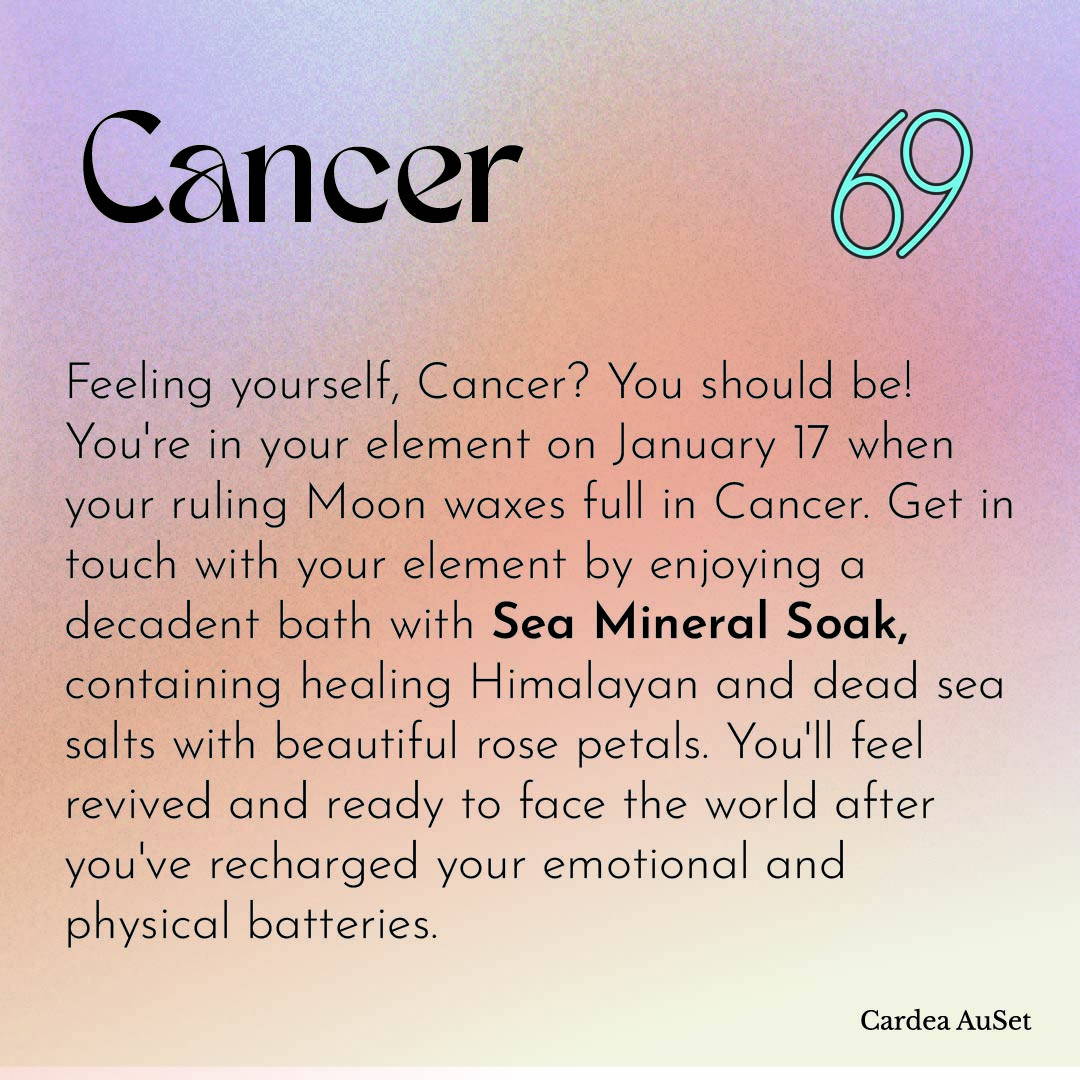 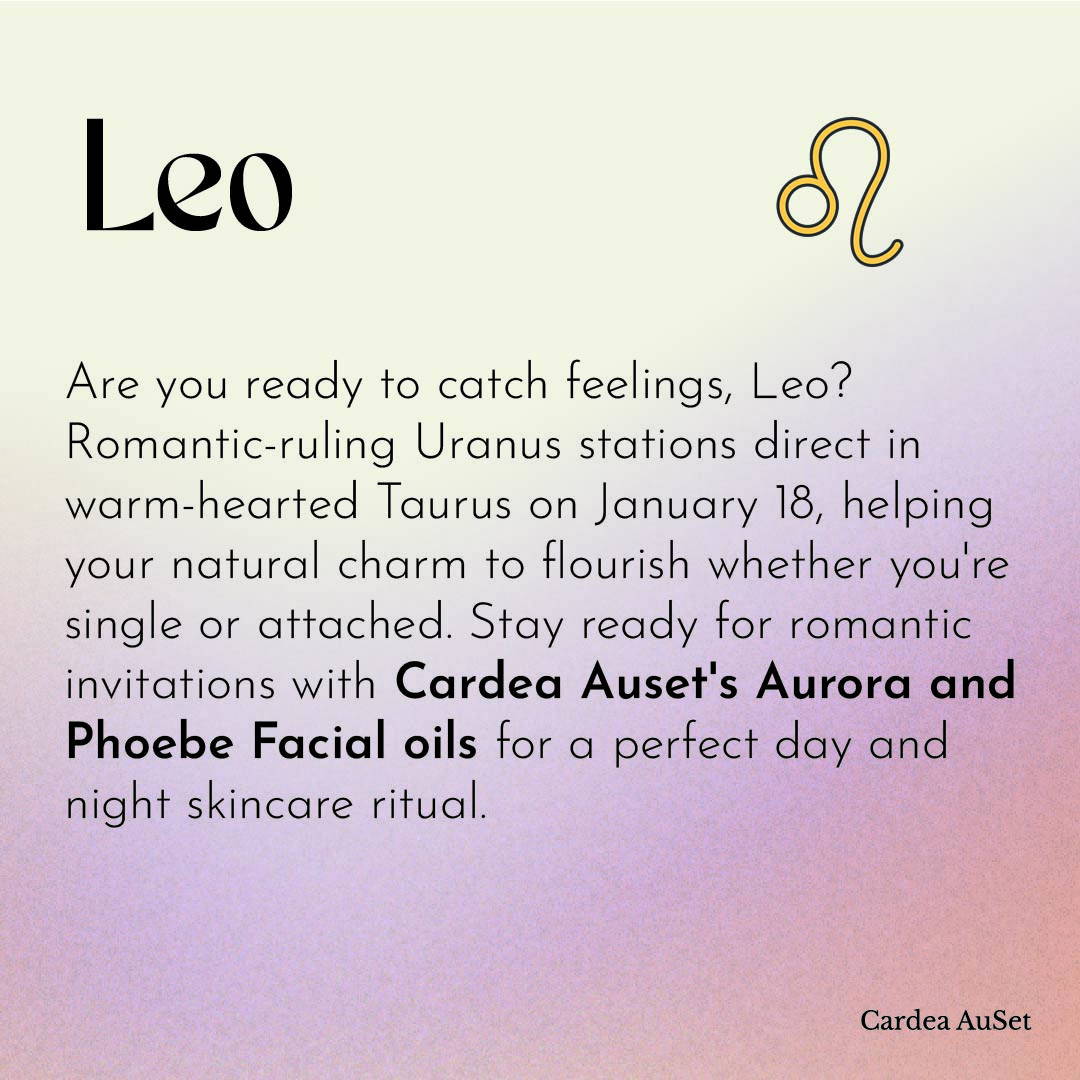 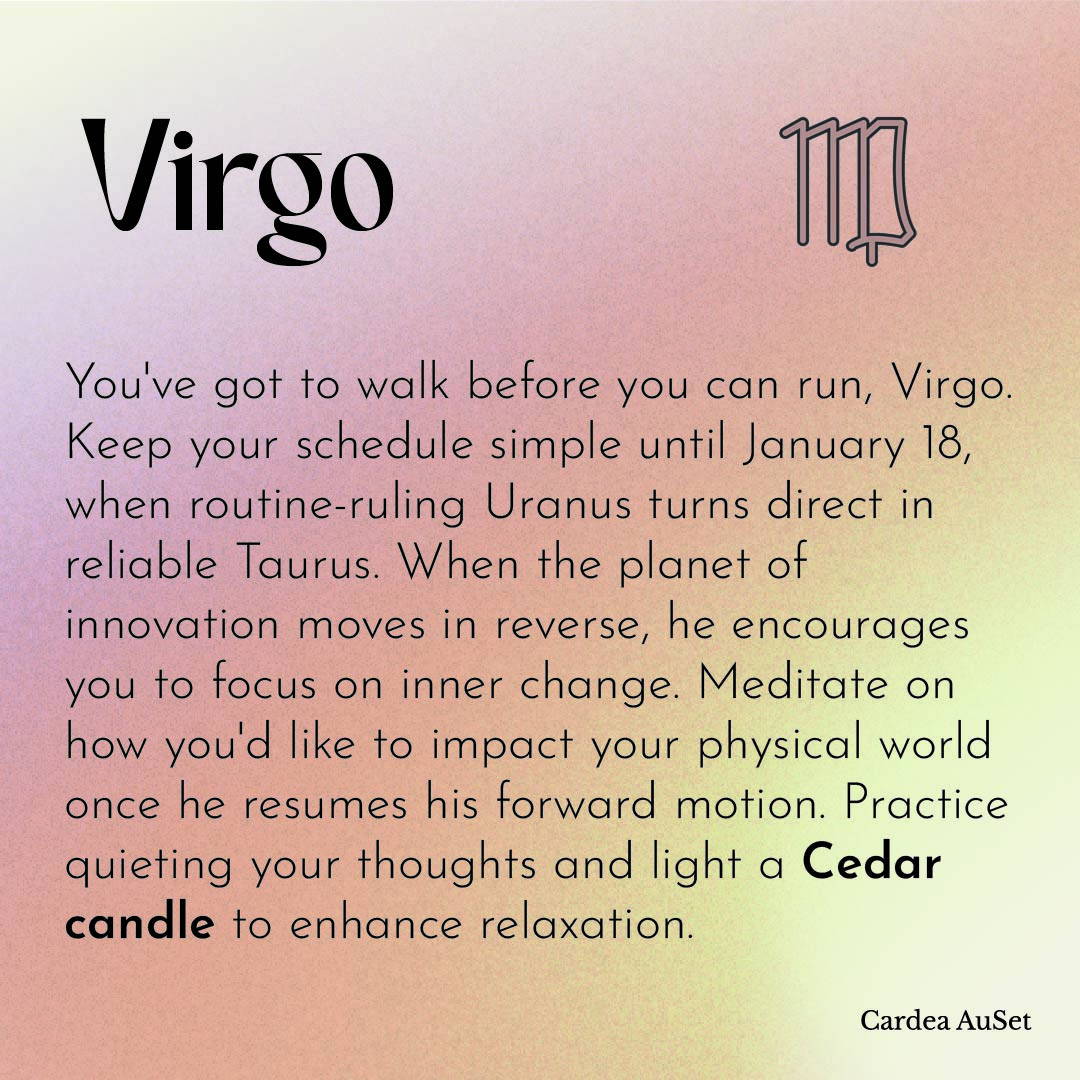 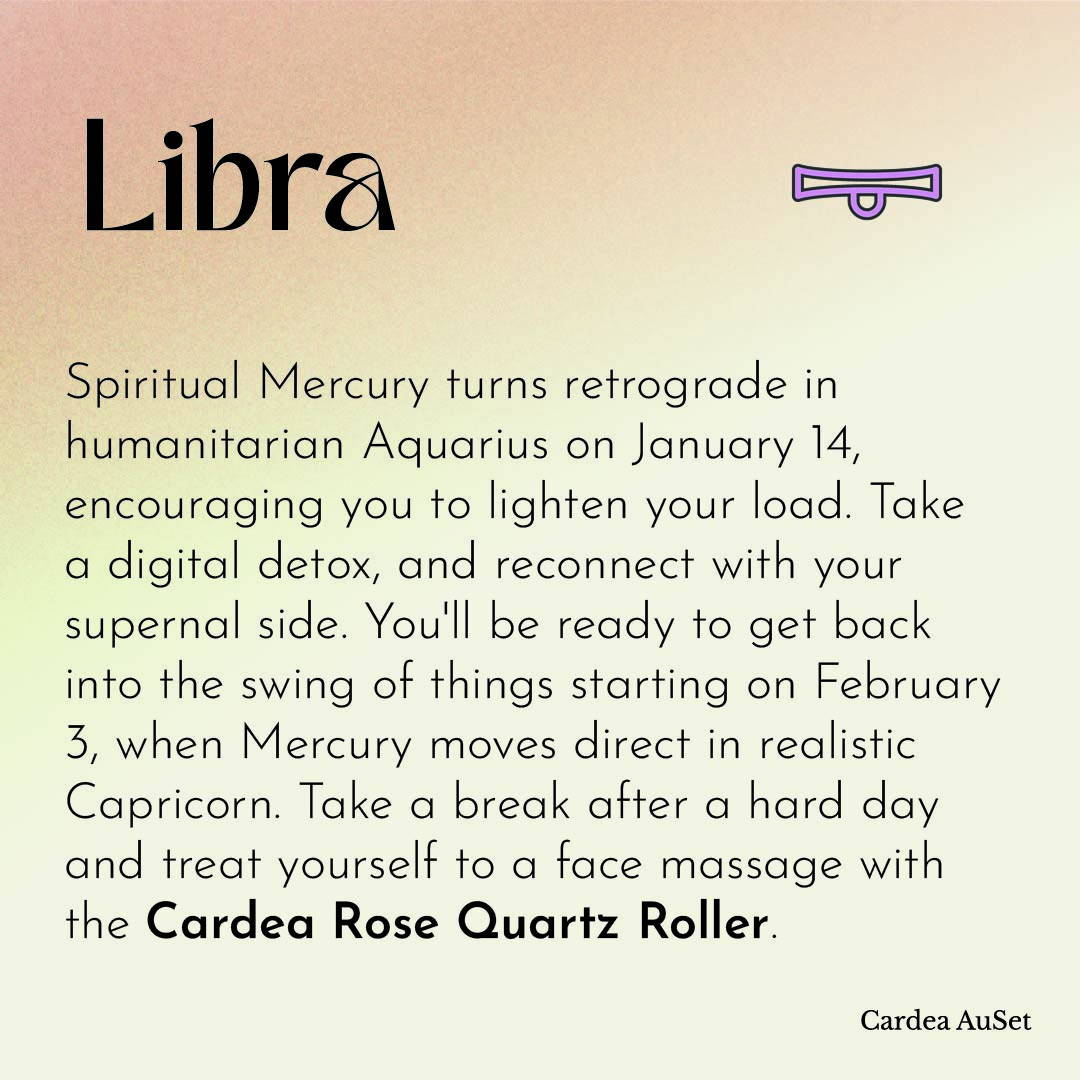 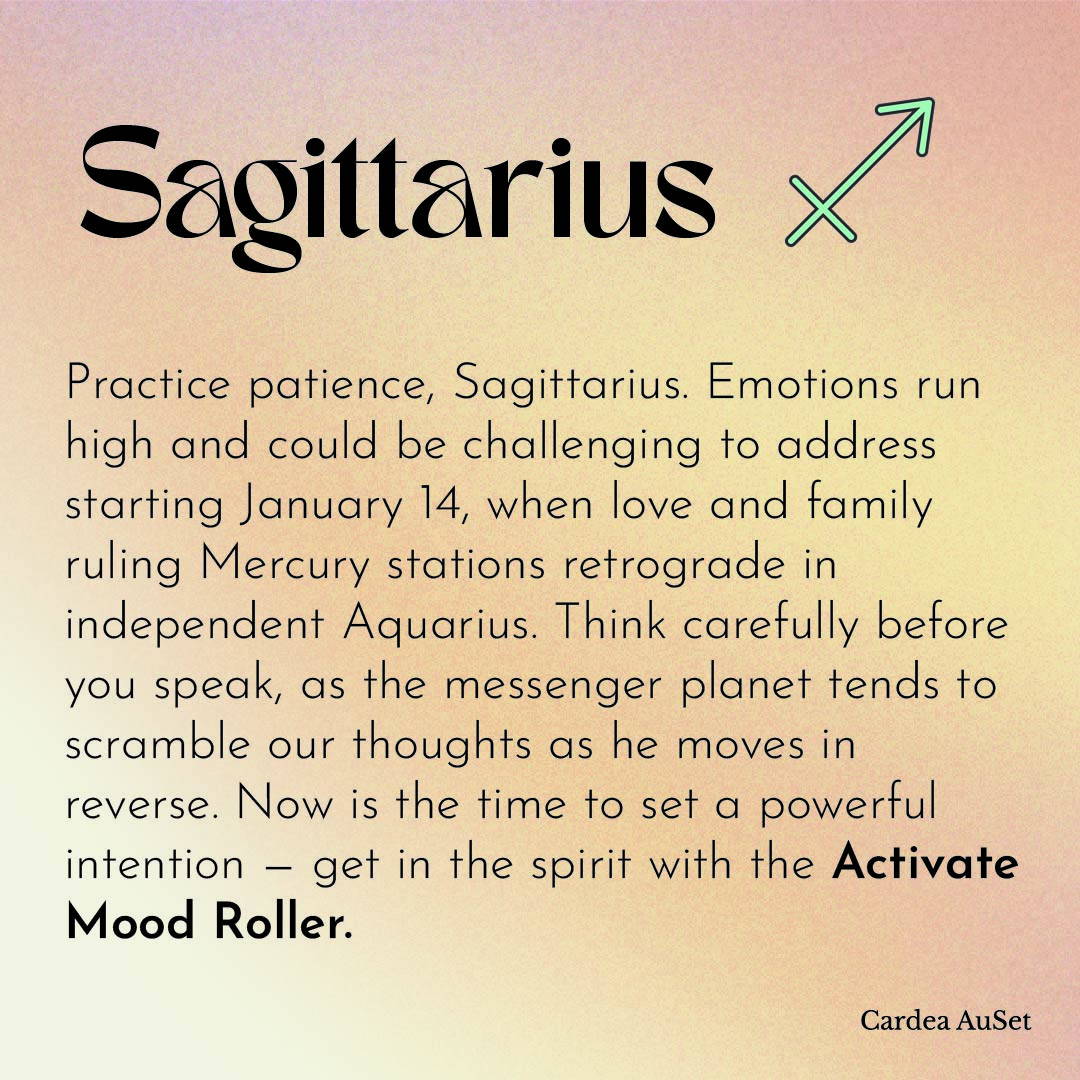 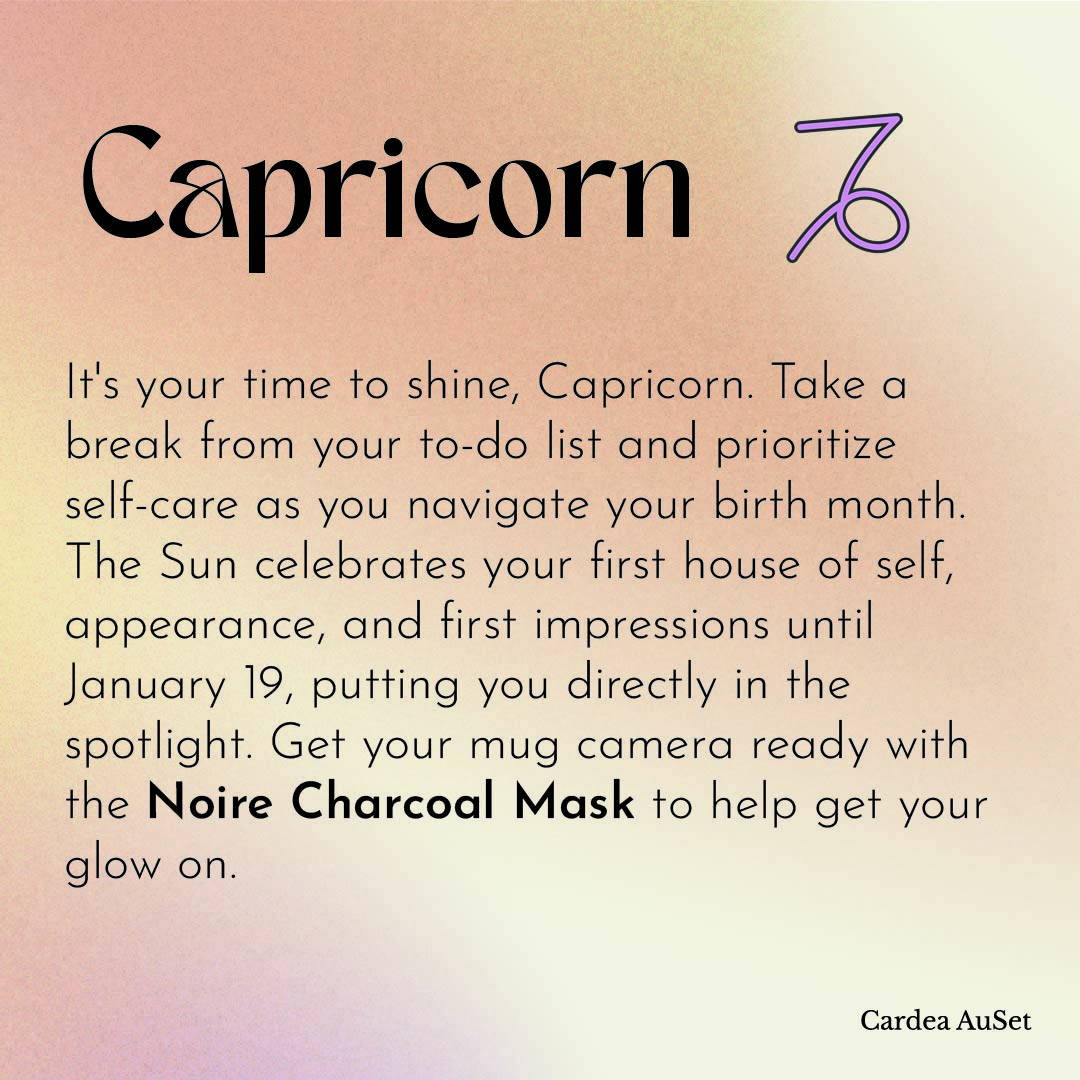 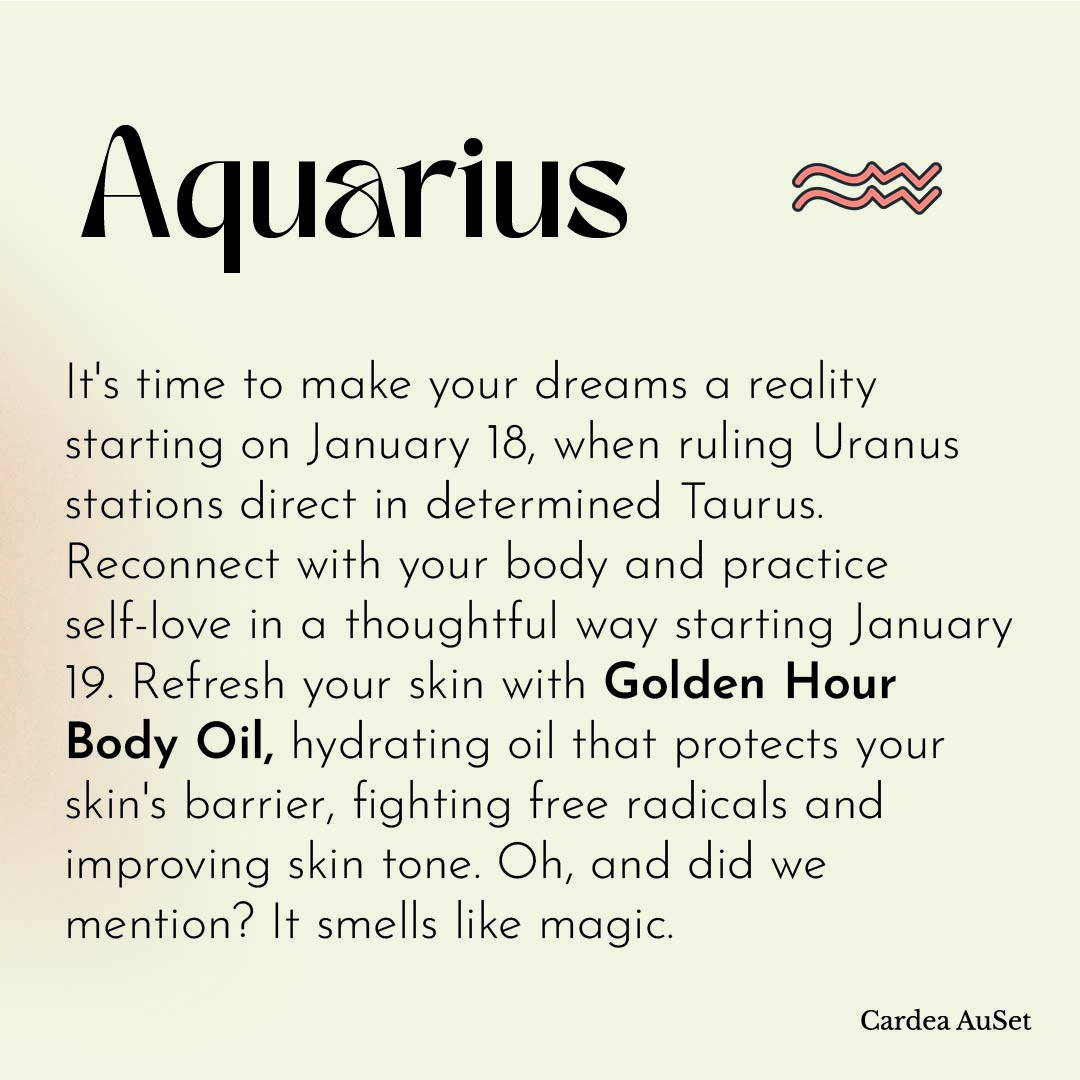 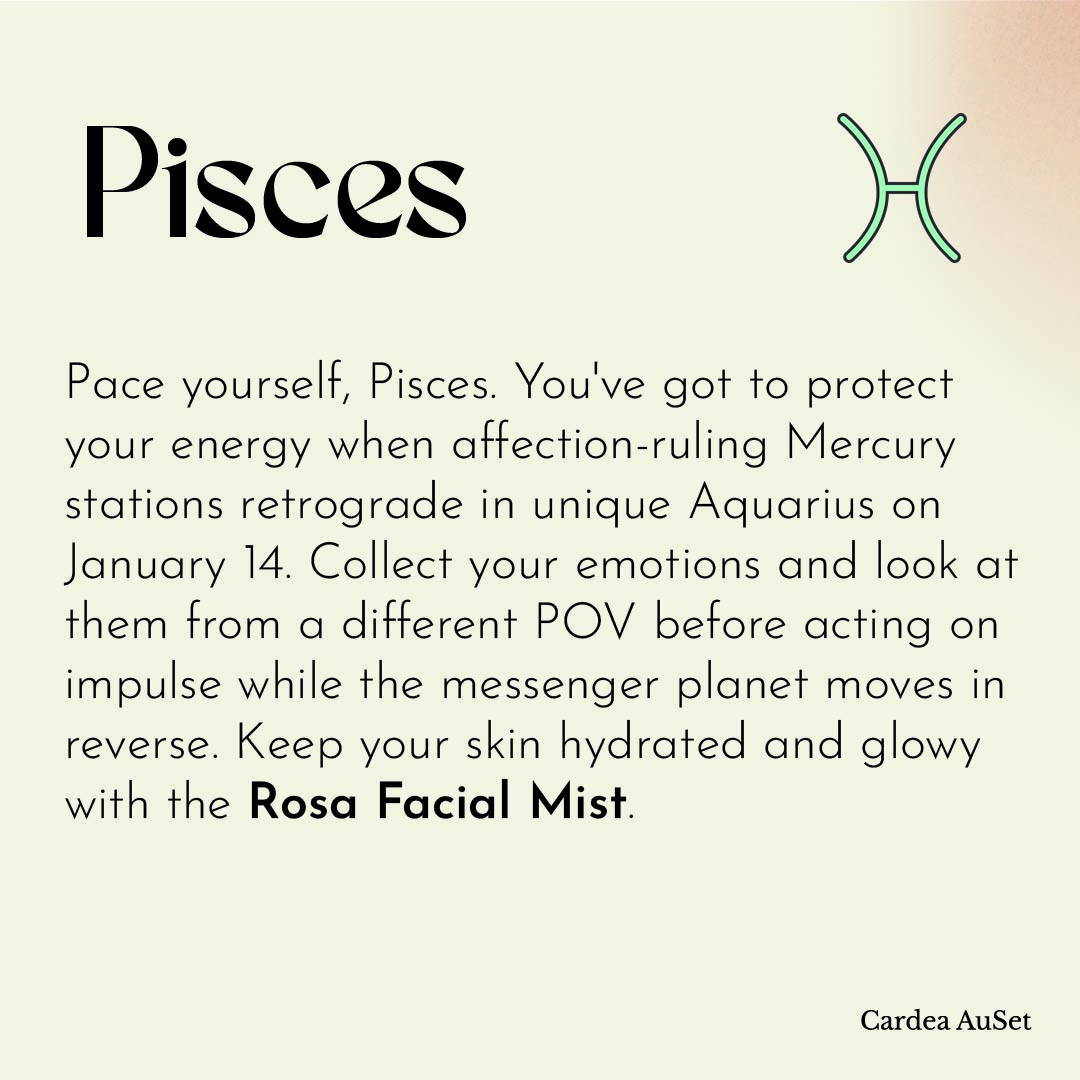 It's time to cool your jets, Aries. Take some time to slow down beginning January 14, when wellness-minded Mercury stations retrograde in independent Aquarius. Chill out and reduce your workload as your routine ruler moves in reverse. You'll be ready to get going again once Mercury moves direct again on February 3 in disciplined Capricorn. Recenter yourself with lymphatic massage and the Cardea Auset Black Bian Gua-Sha. Reflect on how your romantic relationships have developed beginning January 29, as love-ruling Venus stations direct in sensitive Capricorn. You may have learned how to create better boundaries and stronger bonds. You've got untapped potential waiting to be released on February 17, when philosophical Jupiter forms a sweet sextile with enigmatic Uranus. Get experimental and brainstorm under this positive cosmic influence.

Take a look back on 2021, Taurus. After careful review, have you been toying with ideas for your professional future? You've been given a chance for a reset when ruling Venus began to move retrograde on December 19, 2021. You can experiment with your options starting on January 18, when career-ruling Uranus stations direct in reliable Taurus. Stick to the basics and avoid anything that might overcomplicate your self-care ritual until January 29, when Venus turns direct in Capricorn on January 29. If you're still looking for a solid routine, try The Essentials Set, which contains Noire Charcoal Mask, Rosa Facial Mist, and Pheobe Facial Oil.

Get ready to turn the charm on at work on February 17, when popular Jupiter forms a sextile with influential Uranus. It's time for you to pitch your ideas and gather resources for your next big project.

Take a breather, Gemini. It's time to loosen up starting January 14, when domestic-ruling Mercury stations retrograde in easygoing Aquarius. Avoid frazzled nerves by staying present and spritzing a little Calm Mood Mist to recenter yourself. After taking some much-needed "me-time," you'll be feeling ready to take on the world when Mercury turns direct in Capricorn on February 3. Whether you're single or attached, you'll be excited to spice up your love life on February 17 when romantic ruling Jupiter forms a sextile with change-making Uranus. People are up for anything under this magical influence — make the most of it. Try not to go overboard on February 23, when passionate Jupiter forms a semi-square with wellness-minded Pluto. Practice looking at your challenges from a new perspective to stay grounded as these planets work together.

Feeling yourself, Cancer? You should be! You're in your element on January 17 when your ruling Moon waxes full in Cancer. Get in touch with your element by enjoying a decadent bath with Sea Mineral Soak, containing healing Himalayan and dead sea salts with beautiful rose petals. You'll feel revived and ready to face the world after you've recharged your emotional and physical batteries. If you've been itching to start nesting, you've got the green light to break out your toolbox beginning on January 29 when domestic-ruling Venus turns direct in Capricorn. If you've been in a rut, your routine could get a boost on February 17, when wellness-ruling Jupiter forms a sweet sextile with innovative Uranus.

Are you ready to catch feelings, Leo? Romantic-ruling Uranus stations direct in warm-hearted Taurus on January 18, helping your natural charm to flourish whether you're single or attached. Stay ready for romantic invitations with Cardea Auset's Aurora and Phoebe Facial oils for a perfect day and night skincare ritual. Are you thinking about making a career move? You've got the opportunity to reflect on where you'll go next while influential Venus moves retrograde through insightful Aquarius. You'll be prepared for the next chapter when Venus turns direct in hardworking Capricorn on January 29. Cupid strikes a few days late on February 17, when lucky Jupiter creates a sextile with love-ruling Uranus. If you're in a relationship, this is a beautiful day to treat your partner to a bit of adventure. Single? You could catch the eye of someone who's intrigued by your fiery spirit.

You've got to walk before you can run, Virgo. Keep your schedule simple until January 18, when

routine-ruling Uranus turns direct in reliable Taurus. When the planet of innovation moves in reverse, he encourages you to focus on inner change. Meditate on how you'd like to impact your physical world once he resumes his forward motion. Practice quieting your thoughts and light a Cedar candle to enhance relaxation. Money matters become easier to navigate beginning on January 29, when financial-ruling Venus stations direct in disciplined Capricorn. A special transit might inspire you to attack an abandoned home-improvement project on February 17, when domestic-ruling Jupiter forms a sextile with wellness-minded Uranus. Brainstorm with loved ones on how you can bring new life to your space by clearing out clutter.

You're called to support your hidden self, Libra. Spiritual Mercury turns retrograde in humanitarian Aquarius on January 14, encouraging you to lighten your load. Take a digital detox, and reconnect with your supernal side. You'll be ready to get back into the swing of things starting on February 3, when Mercury moves direct in realistic Capricorn. A desire for structure begins January 29, when ruling Venus stations direct in ambitious Capricorn. While this transit helps you meet your goals, it's important to remember to chill out. Take a break after a hard day and treat yourself to a face massage with the Cardea Rose Quartz Roller. You never know where a conversation could lead you on February 17, when communication-ruling Jupiter creates a sextile with change-loving Uranus. Keep your ears and eyes open for an exciting opportunity during this transit.

It's time to get cozy, Scorpio. Domestic-ruling Uranus turns direct in comfort-loving Taurus on January 18. If you've been feeling stuck on making your space your own, start building a mood board and seek out inspiration to create your dream space. Treat your senses with the Cardea Candle Trio to help stoke your creative fires. Romance fills the air beginning January 29, when love-ruling Venus turns direct in sensitive Capricorn. This transit may motivate you to find a more serious boo if you're single. In a relationship? You could be ready to take an exciting step forward with your loved one. An exciting new prospect could arrive around February 17, when money-minded Jupiter forms a sextile with home and family ruled Uranus. Keep your options open if you're ready for a new adventure.

Practice patience, Sagittarius. Emotions run high and could be challenging to address starting January 14, when love and family ruling Mercury stations retrograde in independent Aquarius. Think carefully before you speak, as the messenger planet tends to scramble our thoughts as he moves in reverse. Prioritize listening until Mercury moves direct on February 3 in honest Capricorn, and you'll be set with a fresh new perspective. You're feeling fresh beginning January 29, as wellness-ruling Venus turns direct in persistent Capricorn. Now is the time to set a powerful intention — get in the spirit with the Activate Mood Roller. The blend of patchouli, lemongrass, and rosemary will help you to recenter your thoughts so that you can stay on target. Embrace the unexpected on February 17 as ruling Jupiter creates a sextile with innovative Uranus. Channel your fire into a project that makes your heart sing.

It's your time to shine, Capricorn. Take a break from your to-do list and prioritize self-care as you navigate your birth month. The Sun celebrates your first house of self, appearance, and first impressions until January 19, putting you directly in the spotlight. Get your mug camera ready with the Noire Charcoal Mask to help get your glow on. If you've been feeling a little off your game, you can expect your mojo to return beginning January 29, when career-ruling Venus stations direct in relentless Capricorn. You may have a philanthropic strike of inspiration around February 17, when spiritual Jupiter creates a sextile with money-minded Uranus. Share your talents to help out a cause that's close to your heart.

Are you itching for change, Aquarius? It's time to make your dreams a reality starting on January 18, when ruling Uranus stations direct in determined Taurus. The planet of unexpected developments is moving forward, helping to realize the inner work you've been doing since he moved retrograde back on August 19, 2021. Reconnect with your body and practice self-love in a thoughtful way starting January 19. The love-ruling Sun illuminates your first house of self, appearance, and first impressions. Refresh your skin with Golden Hour Body Oil, hydrating oil that protects your skin's barrier, fighting free radicals and improving skin tone. Oh, and did we mention? It smells like magic with jasmine, bergamot, cedar, and clove notes. Speaking of magic, exciting opportunities arise around February 17, when bountiful Jupiter forms a serendipitous sextile with ruling Uranus.

Pace yourself, Pisces. You've got to protect your energy when affection-ruling Mercury stations retrograde in unique Aquarius on January 14. Collect your emotions and look at them from a different POV before acting on impulse while the messenger planet moves in reverse. Keep your composure, and you'll be ready to open up to others when Mercury turns direct on February 3 in Capricorn. You could get a big break around February 17, when career-ruling Jupiter creates a sextile with enigmatic Uranus. Stay flexible during this lucky transit. You could use your influence to land a new gig or client. Elevate your beauty routine as the wellness-conscious Sun lights up your first house of self, appearance, and first impressions on February 18. All eyes are on you during this transformative winter season. Keep your skin hydrated and glowy with the Rosa Facial Mist, and everyone will be envious of your ethereal glow.

No more products available for purchase

Your cart is currently empty.